The latest craze in the art of having fun turns out to be called augmented reality. A contraption is placed over one’s head that covers the eyes and (sometimes) the ears in an effort to immerse the person in another place and time.

When I think about it, our stereo systems are an audio version of augmented reality.

We work hard in both recording and playback to help us travel to a different place in time and space to experience what seems like a live musical event.

At the press of the play button, we can find ourselves immersed in the moment.

The better our systems the greater the illusion.

Just a quick note to share with you the setup in our room at the Montreal High End Audio show. Today is the last day of the show so if you do have a chance to make it there, it will be something you don’t want to miss.

Here’s a shot of our room taken at around midnight after Scott McGowan and I finished setup. 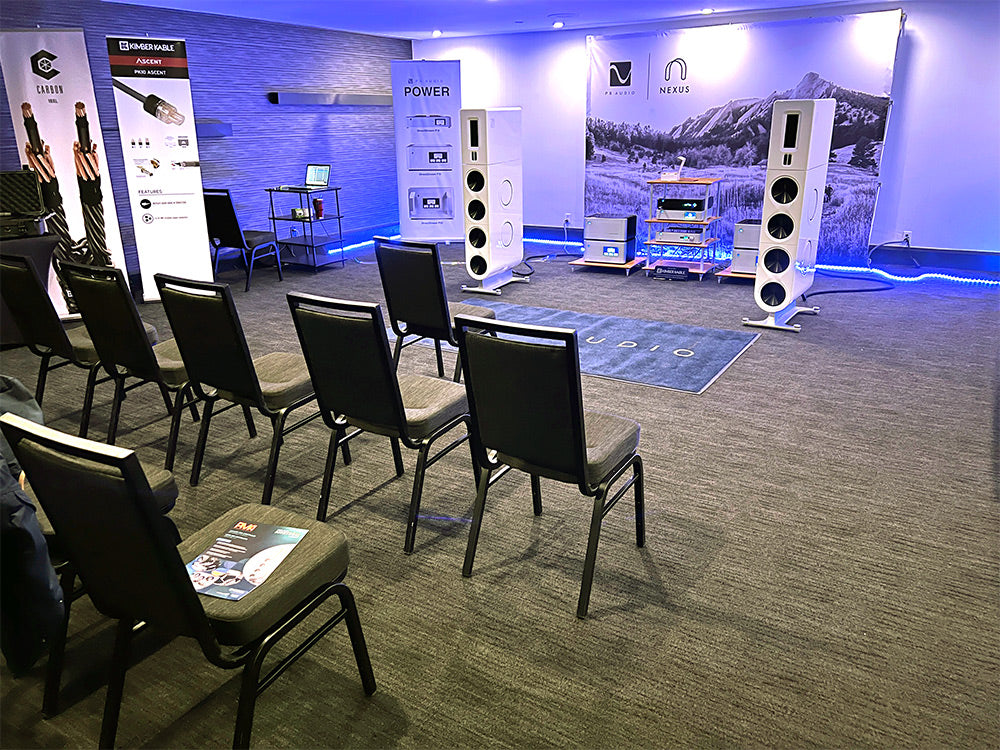 The room is fairly large, as you can see, and the setup pretty standard. In order to get the FR30s to play nice with such a large room, we pulled them out from the front wall to where in the hot seats the bass was pretty even. It only took us a few hours of tweaking to get them sounding quite good.

In either the lone front seat or the row of seats behind, the speakers are simply gone. Close your eyes and there’s nothing but music.

Our thanks to Peter of Nexus, Don of Kimbercan, and Travis of PS Audio for all their hard work getting the room set up so that Scott and I could come in and make the final tweaks.

Hope you get a chance to see and hear them.

Simpler is better for quite a number of things including, traveling, truth, recipes, and math.

But simpler isn’t always better for high-performance home audio. Sometimes a bit of complexity does a better job.

Take for example a loudspeaker.

It’s simpler to use one driver than it is to use multiples, yet the results support the harder and more complex route. It’s perhaps comforting to believe the coherence found in a single driver should outdo any Rube Goldberg crossover extravaganzas aimed at perfectly marrying multiple drivers, but the facts simply don’t hold sway. A woofer attempting to be a tweeter just doesn’t work no matter how much we wish it would.

Another example might be found in circuitry. We may like the quick wave of a hand simple design of a single amplification device in the signal path (proving more that short is better than lengthy numbers of devices to travel through) but we cannot ignore the fact that adding more complexity in parallel like current sources, regulators, and DC servo loops, aren’t significantly better sounding and performing than a single device and a handful of resistors.

Simple can be better but it’s not a universal axiom we should rely upon to choose our equipment.

When in doubt, have a listen.

It is always difficult to have to reject the hard work of anyone but, in the long run, it’s critical to maintain standards.

While auditioning a candidate audio recording we made of a wonderful musician for Octave, I had the unfortunate task of saying no. No, it’s not good enough. No, it serves neither the music nor the audience: instruments—especially the drumkit—sounded dull, lifeless, and blurry.

“It was the best that could be done with what I had to work with.”

Two days later I had the exact opposite reaction to a new recording candidate from a different engineer.

“Holy crap!” I said, “This is the best I have ever heard a drumkit.”

Cymbals shimmered and dripped with realism. The snap of the snare was as visceral and lifelike as I had ever heard. The old Sheffield Direct to Discs sounded like an MP3 in comparison (ok, I get excited as I recall the experience and I am prone to exaggeration).

Without exaggeration, however, I feel confident in sharing that it felt like the FR30s broke out in a smile.

Like the difference between Horowitz and a student playing the piano, or Ansel Adams and me shooting a picture.

I know there are some old sayings about arrows and braves, guns and gunners, and a distant memory of a high-school profanity example too.

However it works for you, I trust you get the point.

When it comes down to skill or tools, skill wins every time.

Following the line of “added sparkle” from yesterday’s post, I think the below note from one of my readers, Blake, is insightful.

“Could it be most reviewers and enthusiasts have synesthesia, and they are “seeing” with their ears?

So much of the terminology is a cacophony of “visual” words, like an Ives precursor to modern “noise” compositions, no wonder it gets confusing. No doubt because so many people’s dominant sense is sight. Even though smell seems a more forceful sense, with the ability to transport people back to their childhoods with a cream and citrus whiff of a Dreamsicle, or petrichor that whisks me back to my 4 year old self and an early evening rain in Lincoln, Nebraska, where bulldozers had scraped the ground bare for the house being built next door.

Maybe the path forward to more aural accuracy in the HiFi world would be to wean ourselves from all the sight-suggestive words and develop our audio vocabularies. Tone, timbre, booming and shrill. Bone-rattling and gut-punching bass. You get the drift.

Sorry for the length. It’s been on my mind for some time after hearing so many YouTube reviewers struggle with this very thing. And the craziness of trying to write about sound! Using a visual medium to convey an understanding about an invisible thing? Oof.”

Not to bring in yet another sensory example but I think Blake’s offered us some food for thought.

One of the touted advantages of headphones is their lack of crossfeed. Unlike loudspeakers, the left and right channels are always separate.

And so it surprised me to learn of headphone folks interested in adding crossfeed to their rigs—kind of like adding unwanted distortion.

First a bit of explanation. When listening to loudspeakers we are immersed in what is called crossfeed: the left channel is first heard in the left ear, followed a millisecond later by that same signal getting into the right ear (and vice versa). Thanks to that small delay between ears our brains can sort out the difference so that we hear two separate channels. Headphones eliminate this crossfeed and thus have an entirely different sonic signature: the left hears only the left channel while the right only what is fed to it.

In real life audio (as opposed to our reproduced version of it), crossfeed is natural. Extend your arm as far to the right as it will go then snap your finger. The right ear first receives the snap and a millisecond or so later your left ear gets a slightly modified version. It sounds natural.

One argument in favor of zero crossfeed is that we’re doubling down. First, the microphones pick up all this spatial information, and then through loudspeakers, we’re doing it all over again. Essentially double crossfeed. True enough but it’s worth considering that most recordings are made with a single microphone and then artificially panned without that delay.

Back in the days when movie moguls like Louis B. Mayer and Samuel Goldwyn ruled Hollywood, cinematographers used soft lenses to enhance the beauty of their starlets.

The softening of the face was thought to add to the star’s beauty because we could not see skin imperfections like pores, wrinkles, and blemishes.

Today, we use razor-sharp lenses and apply makeup to remove the anomalies.

Both techniques were aimed at the same goal. The reduction of imperfections.

We can relate these practices to our own passions in audio.

Like an over-etched or over-sharpened image, some combinations of stereo cables and transducers go too far by unnaturally emphasizing certain areas of sound (cables by means of unequal attrition and transducers by specific addition).

When this happens we’re at first enamored by the increase in detail but over time we’re less drawn into the music.

High levels of detail that are not in balance with the overall presentation of the music can act as a harsh light that makes us squint.

Perfection in an audio system is found when we achieve the perfect balance.

I wonder about the origin of the audiophile myth of golden ears.

In my experience, the differences we hear, the quality of the music played on our stereo systems are immediately obvious to any and all newcomers. I have never had anyone tell me they couldn’t hear “the difference” we bring to the table.

So why are we labeled golden eared? What is it that makes us appear to have special powers of audio observation?

Indeed, I have been with people I would consider as having golden ears. Listeners so astute at their craft they can pinpoint problems and point to probable causes.

But do most audiophiles have greater sonic acuity than your average consumer of audio?

I think not. I believe what the difference is that audiophiles have been exposed to better sound and know the difference between the drek foisted off on consumers vs. what good sound can offer.

We have been exposed to what music can sound like when properly reproduced.

Ringing in the new year

Wow. Here we are once again. Ringing in the new year.

What an amazingly nutso period of time we’ve been through together. As PS Audio’s president, Jim Laib, is fond of saying, this is the 24th month of 2020.

We’ve got a lot on tap for 2022, from the delivery of the new FR30 loudspeaker, the launch of the new BHK600 amplifier, the AirLens audio streamer, and new Octave releases each month just for starters.

I have very bright and optimistic expectations for 2022.

I hope you and yours have a wonderful year ahead and thank you, as always, for being a part of our HiFi Family

Here’s to a great year ahead!

I don’t think I made this up but I may have and have been telling my AV customers this for years. Video never looks real, but sound? Yes, if the stereo system is good enough, like I’ve got here.

Seeing vs. hearing
When it comes to capturing and reproducing dynamic range, audio has visual beat by a wide margin.

The human ear is capable of about 140dB of dynamic range—the same as a 32-bit digital audio capture. That modern recording and playback technology is capable of matching that of the human ear is remarkable. It wasn’t that long ago that tape and vinyl’s limitations of approximately half that range were as good as it got.

Photography, on the other hand, hasn’t kept up as well. The human eye is capable of discerning about 24 stops of dynamic range (a stop is a doubling of light). The best films could capture about 12 stops while modern digital cameras can approach 15 stops—both a far cry from the eye’s capabilities.

And, dynamic range is not all we hear nor see. There are resolution and timing differences too and again, our audio systems are pretty well matched to our native hearing abilities while cameras fall far short. Some of the best cameras today can achieve a resolution equivalent to about 50 megapixels while our eyes can resolve nearly ten times that.

The point of all this is in admiration of how close we’ve come to matching at least one set of senses.

I’ve never been fooled into believing an image is real, but I cannot say the same thing when it comes to sound.