When Octave’s executive producer, Jessica Carson came to us pitching the idea of recording the indie rock and roll band Augustus she wanted to make sure our audience would like their music: a combination of soulful ballad tracks peppered with cuts of loud guitars, bang-it-out drums, and crank-it-up volume.

“Hell yes!” was the answer.

A good many of us were raised on exactly that kind of music: Led Zepplin, the Allman Brothers, Hendrix, ZZ Top.

On a personal note, I have long been fascinated with the idea of perfectly capturing distortion. By that comment, I mean reproducing without affectation the purposefully over modulated, fuzz-toned, distorted output of a Sears Silvertone guitar amp and speaker. Not only was this a wonderful challenge, but it’s rarely done. Most bands playing this kind of music work hard at furthering the distortion by overdriving the mix console or slamming the track in your face. I hear this quite often on modern rock recordings and it turns my purist’s stomach.

When Octave recording engineer Jay Elliott, himself an amazing drummer, took on this challenge it was with crossed fingers we waited for the results. The music was so good, but would this young band be able and willing to work in a completely new way of perfectly capturing their music?

Thankfully, yes. Go here to get a taste of what I mean. The last track sample, James Dean is one of my favorites. It goes from hard-driving foot-tapping classic rock to loud and raunchy. Amazing.

If you’re like me and love this kind of music then this is a great album to grab.

Here’s a link to a video we put together about the album and its recording.

How easily we adapt to our environments. If it’s too cold we put on a sweater, too hot and we find shade, listen to music through bandwidth-limited earbuds, and before long it sounds just right.

While being wonderfully adaptive is a blessing, it can also be a curse. We get so used to the sound of a stereo system—even a bad one—that it becomes difficult to know when something is better.

And to make matters worse, if we don’t form a fairly quick opinion between the two we begin to adapt yet again.

I think this conundrum is one of the many reasons why it’s so valuable to attend as many live concerts as possible.

Once you adapt to the sound of live music, the easier it gets to know when reproductions are right.

Just walked out of the listening room after having auditioned two mix versions of a new song for Octave Records.

Wow. Chills up my spine.

I wonder what it is that connects us to music and story in such a visceral way.

When it occurs I cannot control it. And in its absence, I cannot create it.

There’s something magical about the connections music affords us. It makes me want to grab someone and sit them down in the listening seat and with them share that experience.

That joy. That magic.

Chills up my spine. (the track, if you’re interested, is called “Things worth remembering”

Ever notice how our mood changes our hearing? How good or bad our system sounds?

We may or may not be in a mood to listen to one kind of music or another. We choose which to enjoy based on our inner feelings.

What’s interesting to me is how much this affects our perception of sound quality and by logical extension how stereo equipment sounds.

Of course, there would be those that rise up and say prove it to me.

And there would be my response that there’s no need to prove that which you already know to be true.

What kind of music are you in the mood to listen to today?

Peeling back the onion

It must have been a bit maddening as early researchers into the structure of the physical world kept finding smaller and smaller building blocks: molecules, atoms, electrons, protons, neutrons, and smaller.

Every time they uncovered what they suspected must be the essential particle upon which everything else is built, they peeled back yet another layer to discover even smaller particles, like the “God particle” from the 1993 book The God Particle by Nobel Laureate Leon Lederman.

Our noble quest in high-end audio to peel back the obfuscating layers of sonic hash in order to hear deeper into the music has similar colorings.

The more we clear away the more we can hear what stands between us and the music.

The excitement of discovering that which lies buried is infectious.

What a great journey!

We all like to imagine our products are completely neutral, transparent, and without sonic colorations.

Yet, we know that’s simply not true.

Like it or not (and I tend to like it) the designer’s essence, soul, tastes, and biases towards music are a part of the final product. Their tastes influence musical performance in the same way a recording or mix engineer’s decisions determine what’s going to get your stereo, foot tapping.

People, recordings, audio equipment, and even room furnishings imprint their personalities on the music we choose to listen to.

The challenge then is to make sure you like the personalities of what you choose to surround yourself with.

I’ve never understood the rift between headphone and loudspeaker advocates.

Chat rooms, forums, and blog posts by the hundreds are rife with strong opinions why one’s superior to the other. It is constantly pointed out that headphones are more full range, lower distortion, generally have only one driver, are easy to drive, and so on. Defenders and provocateurs of loudspeakers point out that headphones miss out on any visceral feel, they cannot recreate a true sense of room, and they do not encourage sharing.

The arguments and battles seem rather endless.

I take a different, more moderate view. I like both.

Instead of pointing out the flaws inherent in each, I prefer to instead focus on the positives afforded by these very different methods of playing music.

Each is high-end and each provides an entirely different and unique listening experience.

It’s not that one’s better than the other.

We could safely suggest that both bring us closer to the music in ways the other misses.

When we listen to music we’re hoping for a connection.

Does it touch our soul?

We all have experienced that connection to music. Sometimes it happens at a concert, other times it’s totally random: in the car, somebody whistling a tune, or on your high-end audio system.

The better my stereo system sounds the closer I get to connecting the inner me with the music.

Wouldn’t it be great if we could somehow measure that level of connection?

Alas, we need to rely upon our emotions both for connection and measurement.

In light of recent events, I think it may be helpful to turn to the one thing we can all agree upon.

As some of you know, Octave Records is going to be launching an amazing work in May: the entire Bach Cello Suites, recorded in the cavernous Mesa Arts center by our friend, world-renowned Cellist, Zuill Bailey. Can’t wait to share this masterpiece with you.

In the meantime, Zuill suggested we share a beautiful and healing piece of music, Song of Birds. This was originally performed, sadly, after the tragic El Paso shootings.

It’s music that can heal wounds and soothe the pain. 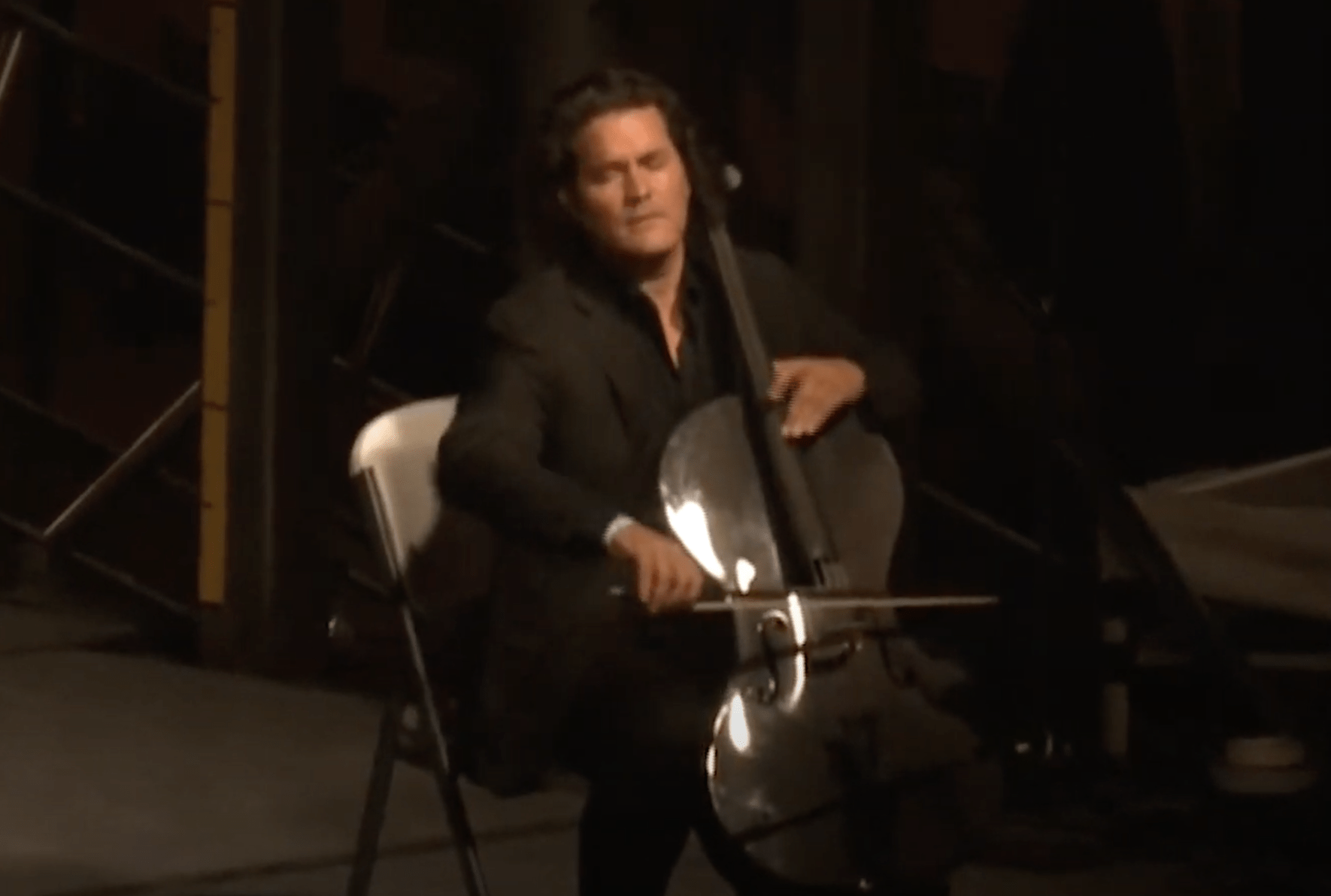 The illusion of sound

There is no such thing as sound or color. These are just imaginary representations crafted by our brains as a way of hearing and seeing our world.

There is no green to the grass, yellow to the sun, or blue to the ocean: No A flat, G sharp, or C major in music—just different wavelengths of light and frequencies of moving air.

In the physical world, light and sound are not grouped as colors and tones. It is only in our mind’s construct to help us make sense of the world we see and hear these poetic representations of wavelengths and frequencies.

It should be of no surprise then that changes in wavelength or vibrational patterns—even the smallest of changes—present themselves as differing colors or sound patterns when our brains reassemble various external inputs and stimuli.

Just knowing that everything we see and hear is a mental construct unique to each of us should be food for thought when it comes to suggesting there’s an absolute sound or vision.

It is, after all, just a personalized illusion.